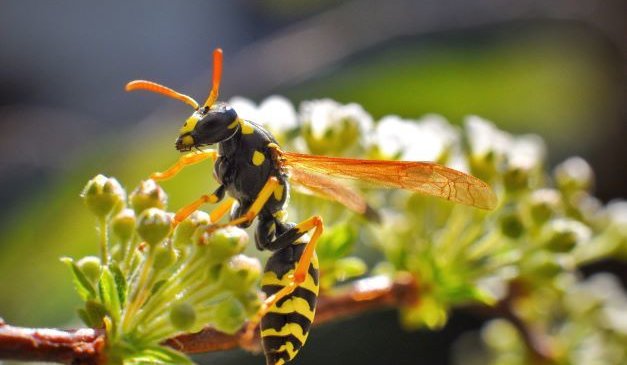 Winter and wasps are not a perfect match. For most wasps, winter is the end of their lives. The motto of wasps during the winter is not to survive the cold but to keep their queen alive so that she can lay eggs when the weather warms up. Most of the male workers are killed during the cold weather, and many starve to death. Old queens and infertile females also die off. However, the queen wasp finds a warm place for herself, goes into a semi-dormant state, and when the weather becomes warm, she searches for a new place to lay her eggs.

If you see a solo wasp during winter, it’s more likely to be the wasp queen. Most of the time, they enter a home through a crack and settle down in a quiet, warm corner until the winter passes off. When the winter is too cold, the queen wasp will go into hibernation until spring. If the winter is warm, the wasp queen may come out of hibernation too early, which can lead to her death due to starvation. If the queen dies, the future of the colony dies with her.

If the wasp queen makes it through the winter, she finds a spot to build her new colony, where she settles and lays her eggs.

What do wasps do during the winter?

Most wasps do not go anywhere. During the first wave of the winter season, most of the wasps die in the colony. The wasps who are protected or survive the winter are a few females who are slated to become queens.

During the winter, the main goal of the wasp colony is to keep the queen alive. When there isn’t much food available, most wasps die due to starvation because they are not high on the priority chain to receive the food they need. Meanwhile, the queen and the potential future queens lie in semi-dormant states until spring.

Where do wasps hibernate?

Often, a queen wasp hibernates in the winter. But not all survive. Each year, out of 4500 queen wasps, only two will survive. These wasp queens hibernate in crevices of buildings and trees to survive the chills of the winter. Some die due to cold weather, some die due to starvation, and some are killed by predators, including spiders and larger insects.

How does a queen wasp look? The Queen wasp is the leader of the wasp nest, and her job is to lay eggs. Therefore, the health of the queen is important, and the whole colony literally puts their lives at stake to protect the queen.

You may find it difficult to spot a queen from among the hundreds of wasps surrounding her to protect her.

So, how to identify a queen wasp?

Here are a few characteristics of a queen wasp that can help you identify her:

Where do wasps live?

Wasps reside all over Northern America. There are found in forested areas, cities, playgrounds, suburbs, baseball fields, backyards, orchards, etc. The possibilities of where they can build their nests are endless as long as they feel protected. Once they have found a secure place, they build their nests either underground or above ground in places such as mounds of dirt, trees, or buildings.

They make nests by collecting wooden fibers that are chewed into a pulp. The wasp nest looks like paper once it’s dried. Once the nest is completed, thousands of wasps can live in it.

What do wasps do in the spring?

In spring, the queens emerge from their semi-dormant state and start looking for a new place to build their nest. The nests can be found in a wide variety of places. For example, yellow jackets build their nests to shrubs, bushes, or suitable places on the ground. After they find a suitable place, the wasps lay their eggs to grow their colony. The growth cycle is of around three weeks.

What happens to the nests when winter comes?

When winter comes, the wasp’s nest gets emptied since the males die off either from starvation or cold temperature. The queen wasp will never occupy the same nest the following year. Hence, the old wasp nest is usually abandoned.

What should you do if you find wasps in your home during winter?

Queen wasps make a nest in warm, quiet places where they won’t be disturbed. Most of the time, their ideal place can be inside your house. If you find a few wasps in or near your home, you can easily get rid of them as these wasps are lethargic from hibernating.

However, if you notice wasps in large numbers, you can set up a wasp deterrent trap around your home to get rid of waps. If this doesn’t help, it’s best to contact a pest control service.

Although most wasps do not survive the chills of the winter, it’s still possible to find a few wasps in and around your home. If you notice them, don’t panic. Remember, these wasps are just out of hibernation and are low on energy. It’s easy to get them removed. If you cannot do it on your own, you can always rely on Take Care Termite. Give us a call now.